Posted by lowernine.org at 8:41 AM No comments:

Posted by lowernine.org at 8:38 AM No comments:

lowernine.org on the morning show, part 1

Posted by lowernine.org at 8:36 AM No comments: 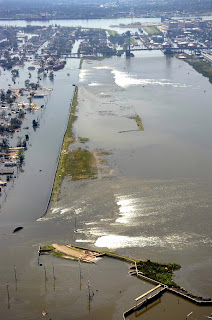 The flooding in the wake of Hurricane Katrina, August 29th, 2005.  The Lower Ninth Ward is to the left in the photo, which shows the breaches in the Industrial Canal levee wall

NEW ORLEANS — Addressing the most politically explosive issue in New Orleans since Hurricane Katrina, a review of a national report Friday recommended that planners throughout the region “discourage” re-settlement in areas vulnerable to destructive flooding.

The 41-page review of an upcoming voluminous report by the National Academies, an advisory panel of scientists and engineers, also proposes the “voluntary relocation” of entire neighborhoods, “elevating” homes of remaining residents; buyouts, and improving local and regional shelters to make hurricane evacuations “less imposing.”

The panel further suggested creating a “smaller footprint” for redevelopment within a 350-mile long hurricane protection system of the metro area, including low-lying areas of Orleans , Jefferson , St. Bernard and Plaquemines parishes.

“Although it can be a politically charged topic, the option of voluntarily relocating some structures and residents is one means to help improve safety and reduce flood damages,” the review states.

The science panel’s proposals were contained in a review of the final draft of the U.S. Army Corps of Engineer’s Interagency Performance Evaluation Task Force — also known as the IPET report.

A massive investigative study of why the city’s 350-mile hurricane protection system failed during Katrina, the final report may be released in May, IPET director Ed Link, a professor of engineering at the University of Maryland , said Friday.

In its review of 7,500-pages of interim IPET reports published through June 2008, the National Academies committee warned that many of the “lessons learned” from Katrina have not been “adequately implemented” in the metro area.

While post-Katrina repairs and fortifications to levees and floodwalls have reduced some dangers, the panel said, the risk of flooding “never can be fully eliminated … no matter how large or sturdy those structures may be.”

The scientists said a “smaller footprint” for the metro area, “especially in areas below sea level,” might create a more manageable and cost-effective flood protection system for the Greater New Orleans area.

“At the very least, pros and cons of a smaller footprint should be a topic for discussion and debate,” the report states. “Nevertheless, it appears that post-Katrina rebuilding activities are taking place largely according to the pre-Katrina (hurricane protection system) design without discussions of how a safer and more reliable design might be configured.”

The costs of rebuilding and strengthening 350 miles of levees, are “substantial,” the report states. The panel recommended consideration of a voluntary buyout program, which is already under study by the corps.

The panel recommends elevating homes in vulnerable areas where owners are “not amenable to relocations.”

Hundreds of people in Orleans and St. Bernard parishes died during Katrina. Tens of thousands lost their homes. More than 100,000 mostly black residents remain displaced from their old neighborhoods.

Shortly after Katrina, a national panel of urban planners recommended that the city rebuild along a smaller “footprint” of the “green-spacing” of the highly flood-prone neighborhoods.

However, many storm-stressed residents viewed the proposal as a “land grab” by developers. In the ensuing uproar, Mayor Ray Nagin — then facing re-election — backed away from “smaller footprint” plans.

“Because it’s such a political hot potato, the issue will be resolved through inertia,” said Tulane University historian Larry Powell, who has written extensively on the city’s post-Katrina reconstruction. “What is missing in all this (report) is any sense of what is equitable — what can be built and what should be built with finite resources. People were displaced as a result of (government) bureaucratic malfeasance. How do you deny them a right to return to their homes?”

The scientists’ proposal also came one day after a Tulane University-Democracy Now poll showed 57 percent of New Orleans voters (including 74 percent of black residents) disagreed with the statement: “Some areas of New Orleans destroyed by Hurricane Katrina should not be rebuilt as a residential area again.”

“African-Americans overwhelmingly, strongly and profoundly disagree with that statement,” national political strategist James Carville, who teaches political science at Tulane, said of the poll Thursday. “I would advise the next mayor not to deal with it in an insensitive way and to try to rebuild as much of the city as we possibly can.”

ITEP’s director, Link, said Friday that he agreed with the recommendations on neighborhood relocation.

“The bigger increase in risk is coming from more and more people moving into areas at-risk (for flooding) than changes in climatology,” Link said.

Local officials should protect public safety and property by discouraging development in the worst areas for storm-surge flooding, by land use and zoning regulations.

“Don’t allow people to develop those areas,” Link said. “It’s an issue that people and public officials need to put on top of the table and address it for the long term.”

On hurricane evacuations, the scientists report said more systematic studies, planning and communication is needed. Longer-term strategies, such as improved local and regional sheltering; and locating facilities for the sick and elderly away from high-hazard areas, should also be considered.

“There is always a risk,” Link said of hurricanes. “You need to know what it is and what to do about it.”

Link said are three types of maps in the IPET report that New Orleans area residents can view on the corps’ Web site: flood-depth charts; economic-risk maps and a “loss of life” map. The data is displayed by subbasins not by neighborhoods.

Link added a warning for anyone thinking of staying in the city for a hurricane: “Mother Nature always bats last.”

Posted by lowernine.org at 8:28 AM No comments: