the latest trip (and a short rant) 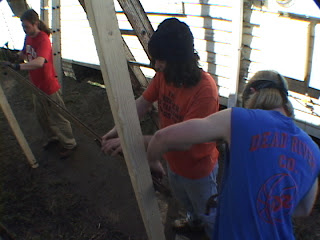 Okay! Not sure if I’m coming or going dealing with this little project anymore, but things seem to keep moving ahead, so I guess I’m going...

Just came back from another ten-day sojourn in the City That Government Forgot, and things are definitely looking brighter, even if only in terms of the little things we are managing to accomplish. Our rebuilding program just got a whole lot bigger with the addition of the houses underway and the waiting list that we inherited from Emergency Communities last week.

For those of you who don’t know, Emergency Communities is a non-profit that has been working in South Louisiana since not long after the storm. Their mission was primarily the feeding of residents and providing them with community centers, which could then be used to distribute clothing and anything else that people needed in the immediate aftermath of Katrina. They opened their last center in the Lower Ninth Ward just about the time we got active in rebuilding in the neighborhood, and with help from us, they set up a program to help get folks back into their homes by providing volunteer labor for reconstruction. We’ve been working closely with them ever since – jointly working on projects, housing and feeding volunteers, providing tools and other support - but they made the decision a few weeks ago to cease their operations, mostly due to a lack of reliable funding sources, and Thanksgiving saw them serve their last meal to residents of the neighborhood.

Which means, we now have taken over responsibility for seeing their projects through to completion, and we are folding their list of qualified residents into ours, so we have approaching fifty families depending upon us to help them return home, as of yesterday. We all will be sad to see E.C. go, but, in the last few weeks, another organization has stepped onto the stage and is attempting to fill the hole that the absence of E.C. will open in the community. Spearheaded by a Lower Nine resident, Ward McClendon, a group calling itself The Lower Ninth Ward Village, has taken over an old machine shop on Alabo Street, and is attempting to create a community center which will address the needs of the area’s youth and older residents. We at lowernine.org have been giving them every bit of help we can spare in the last few weeks to try and see that dream become a reality for the people in our adopted neighborhood and, if spirit and determination and will have anything to do with it, “Mack” is the guy to get it done!
So, stay tuned for developments there.

We had, at one point, 28 volunteers helping us this last week, and we got stuff done all over the neighborhood, from helping clean out junk and build walls at the Village, to knocking down a dangerously decrepit shed at Mr Howard Foster’s house. Our volunteers sheetrocked, painted, did light carpentry, hauled debris, cleaned up a playground, installed toilets and generally made themselves as useful as can be, which is what volunteers always do when they know they’ve only got a certain amount of time to spend in the city and they see the enormity of the work that still remains to be done.

I’m wondering, though, if the rest of the country realizes how devastated South Louisiana still is, New Orleans in particular? I’m wondering why I don’t hear sound bites coming from the presidential debates about doing something about this mess (I don’t watch TV, so sound bites on NPR are as close as I get to what the politicians have to say)? I’m wondering what it means for us, as a nation, if life goes on for most folks, while tens of thousands of our fellow Americans will spend their third Christmas in a row far from the homes they love, and a few hundred thousand more will spend their third Christmas in a row surrounded by evidence of the greatest failure of government in their lifetimes?

By all means, let’s bring the troops home and let peace reign throughout the world! But let’s also remember that the most culturally important city in our country still lies in pieces, and until that horrible fact is addressed by the powers that be in some coherent way, there will be no peace for those of us who are up to our necks in it. Amen!
Posted by lowernine.org at 12:26 PM 5 comments: