SOMETIMES one person’s trash becomes another person’s treasure — even when they are separated by 1,300 miles.

That was certainly the case with the 60 tons of high-end tile that last month ended a three-year odyssey by traveling from this gritty industrial hub west of New York City to New Orleans, where residents will use them to rebuild homes destroyed by Hurricane Katrina.

The journey of the tiles was made possible through persistence, generosity and good timing, and was an example of how building-supply companies, environmental groups and community activists can work together.

Their cooperation may also provide a template for ways to get building materials destined for the dump to people in need, and may prove timely for suppliers trying to shed excess inventory in a slowing construction market.

The trek to New Orleans began by chance at a Christmas party in 2005. Nancy Epstein, the chief executive of Artistic Tile, with seven stores and a distribution center in Secaucus, met Nancy Biberman, the president of the Women’s Housing and Economic Development Corporation, a nonprofit group known as Whedco that was building affordable housing in the South Bronx. 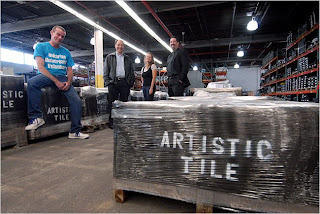 TEAM EFFORT From left, Paul Eisemann, a contractor; Jon Cramer, an energy efficiency consultant; Debbie Grunbaum of Women’s Housing and Economic Development Corporation; and Gerard Esmail of Artistic Tile have collaborated to get leftover building materials to projects where they can be used instead of discarded.


Ms. Epstein offered to donate 120 tons of older and discontinued ceramic, concrete and porcelain tiles to Ms. Biberman for her 128 apartments. Unlike many commercial developers, Ms. Biberman did not need large quantities of similar tiles and could use Artistic’s variety of small lots. Artistic, meanwhile, could reduce its inventory taxes and avoid paying to dispose of the tiles.

“There is a cost to dumping it, and moving it around the warehouse has a cost, too, because it keeps you from putting in new product,” Ms. Epstein said. “There is a pride of ownership when the apartments are done nicely, so we donate whatever we can.”

Yet after Whedco placed tiles in bathrooms, kitchens and common areas this summer, 60 tons — worth about $250,000 — remained unused. Much of it sat outside Artistic’s warehouse on pallets, some in open boxes that exposed ceramic moldings, finished crowns and tiles costing up to $30 each. Another load sat so long in a trailer nearby that its legs had sunk into the asphalt.

Serendipity ensued in the form of Paul Eisemann, who refurbishes brownstones in Brooklyn and who volunteers in New Orleans, where he teaches home-building skills. With the hurricane debris largely cleared and the frames and walls of new homes going up, Mr. Eisemann and community leaders in New Orleans turned to outfitting bathrooms, kitchens and other rooms.

Back in Brooklyn, Mr. Eisemann had been speaking to Jon Cramer, an energy efficiency consultant, about how to get donated construction materials directly to communities along the Gulf Coast. Many nonprofit groups, like Habitat for Humanity’s ReStores, collect construction materials, but then resell them in stores to raise money.

“In New York, there’s so much overbuilding,” Mr. Eisemann said. “For the next three to five years, there’s going to be excess building materials that sometimes are more expensive to throw away than to donate.”

Their task was daunting. In New York, few warehouses had the space to store materials before they were shipped. Transportation costs were skyrocketing. They also had to verify that recipients would use the materials properly and promptly.

But Mr. Cramer persevered. He spoke to Justin Green, who runs Build It Green! NYC, a nonprofit group that sells salvaged construction materials. Mr. Green’s warehouse in Astoria, Queens, was packed, so he had to turn down an offer of tile from Whedco, which wanted to donate what remained from its construction.

Mr. Cramer and Mr. Eisemann seized the chance to put their plan to work. They learned from Artistic that more tile — enough to fill at least four tractor-trailers — was sitting in Secaucus, too.

Mr. Eisemann contacted Mary Croom-Fontenot, executive director of All Congregations Together, an alliance of religious groups in New Orleans that has rebuilt 142 homes with volunteer labor and donations. Her group, along with Lowernine.org, another nonprofit group in New Orleans focused on rebuilding homes, was excited about the prospect of getting high-quality tile.

“Once people get the walls done and the electrical and plumbing, many run out of money for the flooring, the bathrooms,” she said. “So our hope is to help them with one more piece, to make their house a home with this grade-A, top-of-the-line tile.”

Still, the tiles were two days’ drive from their ultimate home. So Mr. Eisemann called the Rev. Scott Sammler-Michael, minister of the Accotink Unitarian Universalist Church in Burke, Va., where he runs the TUUL-Belt Ministry, a volunteer program.

Mr. Sammler-Michael had taken some congregants to New Orleans to help in the rebuilding effort. His group offered $3,000 to pay for one tractor-trailer load of tile to be shipped to Louisiana. Before he could write a check, a New Jersey trucking company that did not want its name publicized agreed to haul the first load without charge. Two trailers picked up the tile in October.

To ready the tiles for shipping, three workers at Artistic’s distribution center spent three days repacking the first 47,600 pounds of tile. The tiles were sorted, crated and shrink-wrapped and filled a couple of dozen pallets. “We want to make sure it goes to a good place,” said Gerard Esmail, the operations manager of Artistic’s warehouse.

Mr. Eisemann and Mr. Cramer are now focused on making sure the remaining two-thirds of the tiles end up in New Orleans.

“It seems like it’s been a really long haul, making hundreds of phone calls and e-mails and putting details together,” Mr. Eisemann said. “But big dreams cost the same amount of money as small ones, so dream big.”
Posted by lowernine.org at 7:01 PM No comments: 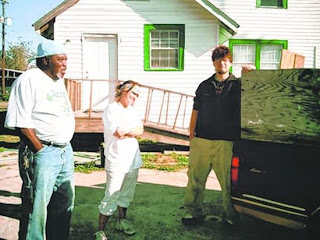 Pictured are Junior Foster, Amy Taylor and Russ Sternglass from Ithaca, N.Y. Russ and Amy are just enjoying a break, and a bit of sunshine, at Junior's before heading to the dump with a load of debris. Junior and his wife were able to get back into their home this year.

COSHOCTON -Amy Taylor of Coshocton spent a week in November volunteering in the Lower Ninth Ward of New Orleans.


This was Taylor's second trip to the area. Her first experience was in March of 2007 when she spent time there with a group of chefs cooking and doing relief work.

Taylor works at Auer Ace Hardware, but is also a pastry chef with her own business, la petit chef. She volunteered this November with the Lower Nine Organization, which assists homeowners with the rebuilding process that is still ongoing from the hurricane damage in 2005.

"Lower Nine provides all the labor at no charge," said Taylor. "The homeowners are only responsible for the material costs. There are many long-term volunteers working with the organization and several who come and go like we did."

Taylor said that most of the homes need to be reduced down to the frame in order to remove all the water damage. The homes in this particular area were the hardest hit since most of them were completely covered with water.

"This is a very historic neighborhood," said Taylor. "Many of the people don't have the money to come back to their damaged homes. Only 17 percent of the people have been able to return to the Lower Nine area."

Taylor spent most of her time during this trip hauling away debris on several different work sites.

"We would get our assignments each morning from the crew leader," she said. "There were usually three to seven people working at each site."

She said that the Lower Nine organization has 40 to 60 homes on the waiting list for repairs. The Bette Midler Family Foundation pays for licensed plumbers and electricians to do the plumbing and electrical work on the homes.

Taylor recalled her first trip to the area in 2007 with 15 chefs from all over the country.

"Our group leader told us then that we would never be able to forget the place once we left and he predicted that many of us would return," she said. "Two of the chefs are now living there. There's just no place like New Orleans. It sucks you in and you feel you need to be there and help."

Taylor said that if you visit the tourist sites of New Orleans you may not be aware of the extreme amount of work that is left to be done in the neighborhood areas. Many people are not able to rebuild their homes and many of the jobs they once had are no longer there. Many of the lots have just been leveled.

"Yet the residents are determined and so thankful for the help they are getting," expressed Taylor. "It's amazing to see the joy these people have in where they live - even if it is a FEMA trailer sitting in front of their house as they wait for the day when their home can be rebuilt. There is a man named Darrin who had spent four days on a roof during the storm before he was rescued. He is now a long-term volunteer for Lower Nine. He lives in a little one-room camper trailer next to the headquarters and works as a site manager to help rebuild his neighborhood."

Taylor feels that her work in New Orleans is a kind of 'pay it forward' thing.

"I would hope that if we ever needed help in our community we would have volunteers come here," she said. "We had a little taste of what that is like back in September with the wind and power outages."

She expressed her appreciation for her boss, Tom Edwards, at Auer Ace Hardware for working around her schedule so she could spend time in New Orleans.

"He is also helping me purchase a professional chain saw to donate to the Lower Nine organization," she said. "I'm taking donations toward this purchase. I figure if 30 or 40 people donated just $5 I would be able to purchase the saw and have it delivered as a holiday surprise."

Taylor said that she has often felt there was something she was supposed to do with her life. When she was contacted in the spring of 2007 by the French Culinary Institute to volunteer in New Orleans, it was definitely out of her comfort zone to go off by herself and volunteer like that.

"I'm so glad I did and grateful to my husband for taking care of things here while I was gone," she said. "When you volunteer like that you realize that 'it's not about you.' There's a lot of life in that city and I hope to be able to return again within six months. It's my passion help this city come back."

Taylor said she would encourage anyone who wants to go to New Orleans to volunteer or donate to the project to contact her for information. She can be reached at 623-8107."

For more information about the Lower Nine organization, go to www.lowernine.org.
Posted by lowernine.org at 7:41 AM No comments: