The following article appeared in the Inside/Out section of the New Orleans Times-Picayune, October 25th, 2008 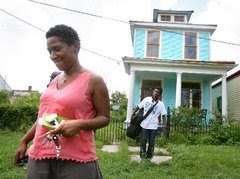 With the plumbing work wrapping up thanks to help from lowernine.org, Greta Gladney hopes to be back in her Jourdan Avenue home by the end of the year.
Danny Bourque / The Times-Picayune Archive


NOTE: Greta Gladney's home-repair project was stalled while she waited for a plumber to give her a bid and get to work. Then, one day, help arrived out of the blue.

Back in August, Greta Gladney thought it would be no more than two weeks before the plumber recommended by a friend would give her a contract to sign and then begin working in her Holy Cross home.

But one delay led to another, and weeks turned into months as she waited and prodded. Then she received a phone call that changed everything and super-charged her languishing renovation.

"I got a call from lowernine.org telling me they finally had a licensed plumber available to work on my house," she said. "All I would have to do is pay for materials."

The nonprofit was founded in early 2007 to help residents of the Lower 9th Ward get back into their homes. It began as an all-volunteer initiative but has since branched out into providing skilled, licensed labor for needs like electrical, plumbing and heating and air conditioning installation. Labor is free, and residents buy the necessary materials.

"Sometime, maybe eight or nine months ago, I was talking to a lowernine.org staff member at the St. Claude Farmers Market one Saturday. She was interested in community-supported agriculture, just like I am, but one thing led to another and soon we were talking about my house," Gladney said. "She told me about the resident services program and said I should come by their office and file an application for assistance."

The nonprofit operates out of a house it refurbished on El Dorado Street in Holy Cross, not far from Gladney's Jourdan Avenue home. She found the office, submitted an application and then forgot about it.

"To be honest, I just didn't think about it much after that, because I knew they had a long waiting list of people needing help. So I just moved forward on my own," she said.

Gladney gutted her house, painted the outside, reframed areas of the interior that she wanted to reconfigure and installed new wiring. But the project stalled when she had trouble connecting with her preferred plumber. As it turns out, maybe the delay wasn't so bad after all.

"I was aggravated at the time, but now I am really glad the original plumber kept delaying, or the work would have already been done by the time I got the call," she said. "Cyril knocked it out in just 10 days for a tiny fraction of what I would have spent."

Cyril Mungal of Semper Fi Plumbing -- a former Marine -- was dispatched by lowernine.org to work with Gladney.

"They called on a Wednesday, and by Friday I had met with Cyril and signed a contract," she said. "The very first time we met, he showed me his license and insurance, something I usually have had to ask for from other people over and over."

Mungal started work three days after the contract was signed. In just eight working days, Gladney said, he replaced the cracked cast-iron drain pipe, ran new water lines for the shower and moved the toilet and the sink upstairs.

"Downstairs, he roughed in for the walk-in shower in the rear room and everything in the kitchen," she said. "He even ran the gas line for the stove."

By the end of this week, Gladney expected to have had Mungal's work inspected so that she could move on to the next step of installing the heating and air conditioning system, something else lowernine.org has offered to help with.

"We were supposed to talk it over this week, but I don't expect any hold-ups. Everything has gone so smoothly with them," she said. Gladney said the staff at the nonprofit is still accepting assistance applications from those who lived in the Lower 9th Ward before Katrina, and she has been spreading word to neighbors who need help.

"A lot of folks aren't aware, but they need to be, because it will help them get back home," she said.

Not all work was suspended on Jourdan Avenue while the plumber drama played out. In fact, Gladney's friend and adviser, James Williams, made sure that key framing and carpentry items were complete, so that there would be no delays in closing the walls once all rough-ins are complete.

"When James and I met over there in August, we agreed that the closet and the study off of my bedroom upstairs really needed to be reconfigured," she said. "The framer who had done the work had framed it so that the window let light into the closet rather than the study. James switched things around for me, and he also leveled the floor downstairs in the rear room off the kitchen, the one that sloped because it used to be an outdoor porch."

Gladney said her dream is to be back home by the end of the year. It would be an ambitious timetable, but she said she thinks it's doable. Whatever the outcome, Gladney said recent developments have left her musing over life's ironies.

"I pushed and pushed and pushed to get that original plumber to the house," Gladney said. "Yet it was when I stopped pushing that what I needed fell into my lap. It seems that's the way a lot of things have gone on this project."

For more information or assistance from Lowernine.org, call 504.278.1240 or visit www.lowernine.org.

Stephanie Bruno can be reached at housewatcher@hotmail.com.
Posted by lowernine.org at 2:28 PM No comments:

Posted by lowernine.org at 12:33 PM No comments: