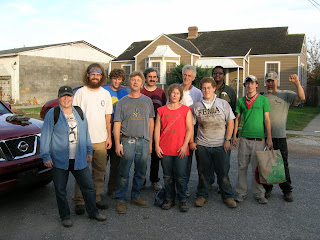 Okay, I know the thing about blogs is you have to post something every day if you want to get folks to read the damned things, but life has been so full for the last month, it just didn't happen. So, if you're reading this, maybe check in every couple of weeks then i won't feel so bad.
Oh, and this won't even be part 2 of the previous post, because here's what's been happening:
I left Maine on the morning of October 14th, bound for Philly, towing an 18' utility trailer loaded with donated tools (trailer also donated!). Generous donors had agreed to give us a 33 foot RV to use as temporary office and living space until we get the new house up and running. The new house is also being donated, but more about that later.
Arrived in West Chester, PA in the evening, where said generous RV donors had paid for a motel room for yours truly, and they arrived shortly thereafter to take me out to dinner. The next day, we ran around getting paperwork transferred to lowernine.org, then we had to drive into the city to pick up the $3,000 worth of scaffolding which had been, you guessed it, offered to us by another generous donor.
It was after 4 p.m. by the time I got back on the road, headed to Cincinnati, where I was to pick up my friend Paul and his son, Kyle, who were making the trip down with me. The last time I'd driven a vehicle as big as the RV was maybe thirty years ago, and it didn't have a heavily-laden trailer behind it, so I gained a much greater respect for long-haul truckers on this trip.
I met Paul and Kyle at their house, took a shower and we hit the open road, in a pretty steady rain. We were headed first to Jackson, TN, where we were to take possession of a 1996 Ford 12-passenger van that I had bought on Ebay two weeks previously, with money from a generous donor. As it turns out, it's a good thing that all these donors were so generous, because we burned about $700 worth of gas between the two vehicles on the trip (so keep those checks coming!). The highlight of that leg of the trip was seeing the look on Paul's face when I told him we would be spending the night in a Wal-Mart parking lot. I had read somewhere that Wal-Mart actually encouraged this practice, but he thought I was pulling his leg. He sang another tune when we got to Wal-Mart and he saw that not only were we not the only RV in the parking lot, some people had satellite dishes set out and were having a pretty good time. Wal-Mart's open 24 hours, so we had a bathroom and could buy anything we needed right there. You gotta love this country!
The guy we bought the van from met us in the morning, and after handing over the papers, we headed out of Jackson, into Mississippi and on down to New Orleans (again, in a driving rain). We arrived around 8 p.m. and spent the night behind the Emergency Communities center in the Lower Nine, all safe and sound.
And now, we're here - in the most neglected and forgotten spot in the country. If you don't believe that, then I encourage you to email me and agree to volunteer with us for a week or so. You'll be totally amazed by the energy of the volunteers who are trying to put this neighborhood back together, but you'll also be shocked and appalled by the inaction of the so-called leaders of the greatest nation on earth.
Since arriving, joined by my friend Matt and my brother and sister-in-law, we've been finishing up a rebuild project we started in the spring; consulting on other projects and lining up future rebuilds; meeting, along with Bill Robertson who is on my board of directors, with directors of other community organizations to find out how we can all work together; and, learning a little about the ins and outs of dealing with Louisiana bureaucracy. Oh, and there's always the not insignificant problem of trying to get my wife to understand why this is so important to me at this late stage of my life.
So, keep those cards and letters (with checks enclosed) coming, and I wasn't kidding about volunteering so you can come down and help us do this job - it'll change your life...
Posted by lowernine.org at 6:36 PM No comments: