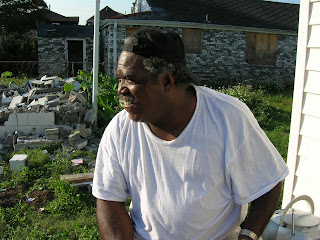 You know how something can bug you? And for long periods of time, it can just be a nagging sort of feeling in the back of your mind, because you've never really stopped to examine it - what it is, what bugs you about it? Well, I had that nagging sort of feeling over the last few months, didn't pay much attention to it, sort of forgot about it, but, then, I read something the other day that not only reminded me that something was bugging me, but named it, clarified it and solved the problem, all in one swell foop, to quote Roy Blount, Jr..

The thing that had been nagging me was people all the time referring to the folks we're working with in New Orleans as "victims." I never paid much attention to it, just sort of accepted the characterization and moved on, intent on helping folks and not worrying about labelling them one thing or another. But, then, just the other day, Barbara gave me a copy of a sermon by a minister named Davidson Loehr, pastor of the First U-U Church in Austin, TX (Barbara's a seminary student, so she can do things like say, "Here, you might find this sermon interesting.")

Although the sermon was about something else, though not entirely, he talks about how the liberal, progressive, socially-conscious person approaches the world often from the perspective of an outsider who is going to step in and help a "victim." Whether the person in need of help is "victim" of patriarchal oppression; or racial bigotry; or economic forces beyond his or her control; or sexual repression; or religious intolerance, whatever! The point is, many people, in order to feel they are doing something meaningful and socially positive in the world, have to put themselves into the role of the "saviour" (my word, not his). 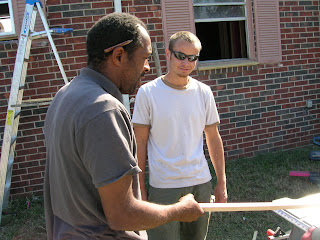 But, if you think about it from the point of view of the so-called "victim," despite what may have befallen you in life, what you are, in fact, is a survivor! If you are a survivor, you have strength. You may need help to overcome certain obstacles that remain in your path, but you've already proven your ability to weather the storm, so to speak.

This idea immediately struck a chord with me, defined that nagging, bugging thing in the back of my mind, and served to reinforce the feeling that has been growing in me since I undertook this work over a year ago. I have never felt anything other than that I was working alongside equals (in many cases, betters) while we continue to tackle the work that needs to be done to rebuild the Lower Nine. I work alongside people who spent two, sometimes three days, on the roofs of their houses in the heat and without water before the powers that be felt it might be a good idea to bring them inside to something like shelter inthe aftermath of the storm. People who resisted the government's best efforts to get them on planes and ship them to the middle of nowhere, who are back in their native city, if not their homes in their neighborhoods, and who are working every day to return, rebuild and restore hope, where sometimes hope seems beyond the human heart's reach.

Reverend Loehr goes on to point out that, not only are these people survivors, many of them are, in fact, "warriors!" For what else can you call someone who survives something as devastating as Katrina/Rita/U.S. government incompetence and criminal neglect, and continues to fight for his or her home and neighborhood and city? And these warriors let me stand alongside them, every day, and allow me to bring whatever resources I can to the struggle!

So, thank you Davidson Loehr, for the words, and Barbara Prose for bringing them to my attention. But, most of all, thank you to Darren McKinney and Ward McClendon and a host of others whom I won't name here for fear of leaving someone out, but, thank you all for being warriors and for allowing me to fight the good fight with you.
Posted by lowernine.org at 2:35 PM 5 comments: