(what follows is a recent email message from lowernine.org volunteer, cory phinneron, to friends and family, in the interest of giving readers something other than my bloviational maundering [not sure if either of those are words, but they sound good to me]. what follows are cory's words, as he wrote 'em) 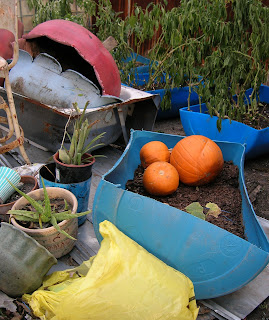 ...or rather, the condition that the part of new orleans
that i have seen is in...

i've been working in the lower ninth ward with a
group, lowernine.org. the group is
solid. at times it feels scattered, organizing large groups of volunteers coming in and out for only a few days, but at the end of the day, progress is being made, steadily.

lowernine.org needs more skilled volunteers. often, electrical, plumbing and framing keeps progress held up because unskilled volunteers can't do it. beyond that, people who have done sheetrock or insulation of anything else can drastically improve the speed at which the houses get completed.

lowernine.org is in the stage of rebuilding houses.
they are rapidly growing and ready to branch out to an
urban gardening project as well as a social services
branch, focusing on psychological support to both the
residents of long term rebuilding as well the
volunteers who are down here long term.

the lower ninth ward is somewhat of a rectangle.
roughly 2x4 miles. the southwestern part is the holy
cross neighborhood, and that's where we are working.
the northwestern part was closest to the levee
breaches, so much of the land up there is still
completely desolate. as you move from the
northwestern tip away from the levee, you go from no
houses, to a few houses still uninhabitable, to maybe
half the houses still standing but mainly
uninhabitable, to most of the houses standing in some
sort of state of repair - with some finished, some
rebuilt, and some 'blighted', meaning there are no
signs of return since katrina. there are few stores that have opened up. and for once, i wish wal-mart would open up. but wal-mart sits there closed because the store would be losing money if it opened, although it would be providing much needed supplies (including $4 prescriptions) at a close location.

the holy cross neighborhood is slowly but steadily
being rebuilt. most of the money seems to be coming
from insurance, FEMA, and private funding such as
non-profit organizations or the homeowners. insurance
coverage is ridiculous. one example: insurance
covered the lost roof of the house, but did not cover
the entire house that was lost since the roof was
ripped off and everything was ruined. insurance
companies are trying hard not to pay, and residents
have to fight steadily to get the money they are owed.
FEMA has a bad rap but i don't actually know much
about their support.

the holy cross neighborhood seems to have a strong
community network. they were already having community meetings before katrina, so it makes sense that they have pulled together faster than other neighborhoods. rebuilding in holy cross is going along in a
conscious sense, with attention being paid to
sidewalks and community centers and neighborhood gardens and supporting the
residents through services such as legal help. holy cross is also known for it's focus on
green rebuilding and sustainable design.

most of the lower ninth ward feels like a construction
site, if it doesn't feel desolate. other parts of new
orleans that were flooded are completely unnoticable
as being damaged now. the levees are being rebuilt
higher in richer neighborhoods. and there is always
the underlying problem that maybe some of these
neighborhoods shouldn't be rebuilt because they are so
low (and, as one might guess, these dangerous areas
are mostly inhabited by the poor).

not one school is open in the lower ninth ward.

on a lighter note... the residents and homeowners that
i've worked for and with are incredible patient,
surprisingly. i guess they have been out of their
homes so long that they really want to see everything
done right. there's no rushing, and the focus is on
getting the job done right. many residents are ready to return. all the residents we are working for are thrilled at the completion of each stage of their house. lowernine.org's list of residences to work on is over 100. several residents live 20 minutes or more outside the lower ninth ward, staying with family or friends, and drive in everyday to work on their houses. their energy seems endless and is amazing.

the lower ninth ward is still no where near rebuilt.
residents set their sights on 10 years to finish this.
it's amazing how devasted it is, given the time since
katrina. there are contractors down here who are
leaving the job half finished and stealing the money.
there are contractors that do a damn good job. there
are homeowners working all sorts of strange hours to
get themselves or friends back into houses. and there
are several volunteer groups working down here. after
working with lowernine.org for 3 weeks overall, i am
grateful to have found such a well organized, well
intentioned, well motivated group of people working to
support a cause that has not recieved the help that it
rightly deserves.

peace
cory
Posted by lowernine.org at 8:59 AM 2 comments:

a test of the video blogging system


"What Tourists Don't See" from rick prose on Vimeo.
Posted by lowernine.org at 6:34 AM 1 comment: